This was written by my "big-little" brother, Maxwell. His favorite sport is American football, so when asked to write about it in an essay for school, this was what came out of his brain. :)
Yes, we all have a somewhat peculiar sense of humor. B-)
So go ahead, sit back, and enjoy a taste of Maxwell's goofiness. 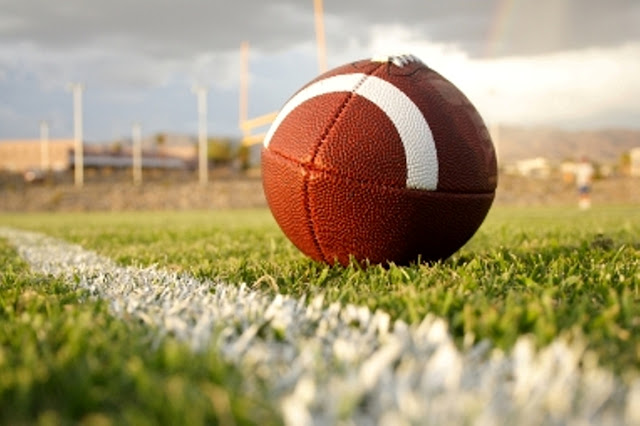 THE WONDERFUL WORLD OF FOOTBALL


Very few thrills compare to that of watching a team (which you temporarily want more than anything to win) roll up the field. (For purposes of illustration we will call them the West Albuquerque St. Bumblebees). With five minutes left in the game, and trailing by three, the Bumblebees quarterback throws an interception. The game now depends on whether your team can stop them from making a touchdown, as another score would bring about certain defeat. They’ve been forced to punt it! The bumblebees are back in the game with 30 seconds left they go for the long bomb. They’ve got it! It’s a touchdown! The point after is good, and the Bumblebees East Mountain Tech 24-20.


Football is played with eleven players on each side, on a one hundred yard field. You have four downs (chances) to get ten yards. If this is accomplished you get four more downs to get ten more yards. Once you reach the end of the field you get six points. However, if you are on fourth down and are close to the endzone you may wish to try to kick a field goal. Kicking a field goal is when you try to kick the football through a goal, similar to a soccer goal except suspended in the air. When you are on fourth down and far away from the endzone then you may punt the ball to the other team. Punting is when you kick the ball as far as you can to try to make it harder for the other team to score.


This exciting game depends on the skill and strength of the players, as well as that of a host of different coaches. The star players are generally the quarterback (the one who throws the ball) and the running back (the one who runs the ball). They each have a private coach; other coaches include the Headcoach, the assistant coach, the Quarterback coach, the runningback coach, the linebacker coach, the special teams coach, and the wide receiver coach (each of these coaches have less important assistant coaches). You think you’re done? Wrong. You still have the offensive coordinators, defensive coordinators, cheerleaders, ball boys, water carriers, and, of course, the referees (though they don’t seem to do anything, other than make bad calls, they are essential to keep the teams from getting too proud of themselves ). Oh, and I almost forgot Great Aunt ‘Tilda up in the bleachers. She’s hard of hearing so you have to shout over the crowds for her to hear you. You also have to worry about her sudden attempts (and failures) to stand up. Now, you’re ready to play. Actually you still have to warm up (long pause). Oh; you’re done playing catch on the sidelines, and punting footballs into the stands?  Then now, finally, you’re ready to play! To demonstrate I will give you the basic layout of a game.


As a general rule the game begins with a lady standing in middle of the field, with a giant American flag, singing the national anthem at the top of her lungs. (Though singing on tune is preferred, as long as it is louder than the drums, it is not required.) Then, it’s time for the kickoff during which one team kicks the ball to the other, and for the first few drives they politely punt the ball back and forth. Though, occasionally one team scores right away. However, if this is the case the refs (who always cheer for the under dogs) will start penalizing them. After this they settle down to scoring. apparently it is harder than it looks, because sometimes they don’t score on a drive. After a few hours, one team will have more points than the other and they are proclaimed the victor. The winning team generally celebrates with pizza or ice-cream, while the losing team walks off the field mumbling something about the dirty refs.


One reason that football is known and loved in America is that anyone can play it. I love it because it is a way to get exercise while trying to improve your skill. I also play because it is a way to spend time with friends. Another advantage is that you can play it almost anywhere.  Whether you’re in a stadium or in the backyard with your friends, as long as you aren’t paralyzed you can play football.
God bless!
I'll be back soon! :)