Hey all! Another Novel Idea post! Hope you all are enjoying these as much as I have while writing them!
The Prompt:﻿
This week, we want to challenge you to write a scene about the following photo. Anything goes, as long as it relates to the picture in some way. Let your imagination run wild–we can’t wait to see what you come up with!

They gave me this photo:

But I asked them if I could take a few liberties and switch to this photo: 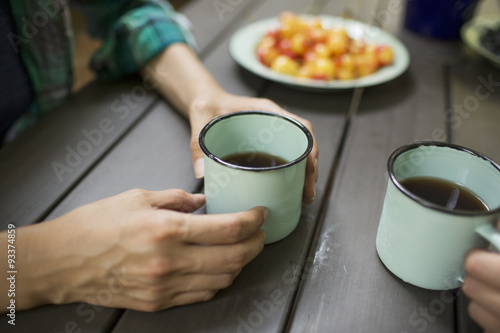 They said I could, so I now present you with:


I am Café, a proud American and Caffeine Goodness Deliverer for over ten years. I’m one of what you humans call “coffee mugs”. My friends call me Cay for short, so I will give you the liberty of calling me that. I’m not those weird mugs with quotes on them that think they’re so wise, nor the cheep, disposable cups that will sell themselves for a dime a dozen. Literally. I’m a kind of ordinary guy. Sure, I’m not drop-dead handsome, but I’m not completely plain either. I’ve got a nice brown stripe around the inside of my rim and around my base. Simplicity is usually best.


I’ll stop boring you with details now and get on to the story I know you want to read. Which is why I dictated it to my dear friend, Penny…she writes the most beautiful cursive in blue ink when she’s inside her master’s hand. Sadly, with no ink inside myself, just coffee, the only way I can create art is in brown circles, and that only when my master or mistress accidentally spills my contents into puddles around my base. Boy, those times make my day.


More details. I’m sorry. I get easily distracted these days. But it’s important for you to get some background. We coffee mugs participate in the weirdest things you humans do. We see the worst of you (in the morning when you grab us, fill us with caffeinated goodness, and try to wake up) and the best of times (when a guy takes a girl out for a date at the nearest coffee shop and both dress to impress). I’ve seen it all since my home is in an open-air café (hence my name…my mother wasn’t very creative.) Especially the dates. Boy, I tell you!  I’ve seen awkward dates, adorable dates, weird dates, creepy dates, business dates, happy dates, sad dates, mad dates, sweet dates, funny dates, flirtatious dates…which usually end up being awkward for us coffee mugs…you name it, I’ve seen it happen. Right under their noses.


But I’m getting ahead of myself. I’m here to tell you a story and Penny is sending me glares that tell me she’s going to strike unless I get on to it. So I will.


It all started when I was busy chatting with one of my coffee mug friends, Mocha…you know, just passing the time of day.  We were in a booth together in the hands of two people. The meeting was getting boring for the two of us, you know, mostly business matters, politics, and the stock market roller coaster. We pretty much ignored them and talked to each other, breaking only when we had to travel up and deliver our caffeinated goodness you humans call “coffee”. Minding our own business while the humans took care of theirs. We were in the height of our existence…


Then she walked by.


Ok, so she was in the hand of a human and the human walked by. It’s amazing what small details Penny catches.


But I digress. Where was I? Ah, yes, the human walked by with her. Thank you Penny, what would I do without you?


Anyways, she walked by and immediately had my attention. It’s not every day that a teacup makes it into a coffee mug’s life. The waitress placed the teacup down on the table and began her recital of stuff that, after ten years at the café, completely went in one ear (metaphorically, since we coffee mugs have no ears) and out the other.


While the humans bantered over the price of potatoes in Idaho or some outlandish place like that, I watched the teacup’s face. She was absolutely stunning. Flowers curled around her body, even into the cup itself, and she proudly wore a golden handle. We coffee mugs felt incredibly plain beside this vision of loveliness. Mocha and I looked at each other briefly, but it was enough to see that Mocha was going to set me up. Ever since he had happily paired with a pretty travel mug on his shelf, he’d been trying to get me to meet a girl and settle down. I had been his best mug for the ceremony we held after closing hours almost a year ago, and I guess he felt he had to repay me somehow.


I had evaded his efforts so far, but I knew I couldn’t hold out forever. Coffee mugs were meant to be in pairs. At least, that’s what Mocha had always told me.


Suddenly she saw us, and when her eyes met mine, I thought I might melt into a puddle of caffeinated goodness right then and there. Maybe settling down and growing a family wouldn’t be as bad as I first thought as a confirmed bachelor. My resolve was fading quickly.


“Good day, sirs,” she said in a honey-sweet voice. And, my goodness, her accent. Was nothing ugly about her? I had always thought the American accent crude…but her English one was absolutely gorgeous.


“Hi,” I replied, inwardly kicking myself. HI?? That was the best I could do??


“I’m Mocha, and this is my friend Café.” Mocha spoke up for the first time. He always had a way with the ladies, which is partially why he was married and I wasn't, that I could never pull off. Me, I always ended up doing something stupid.


“Yep, that’s me,” I said without thinking. As I was saying… something stupid. Like that.


“What’s your name?” my friend asked.


“I’m Adderley,” she responded. “But my friends call me Addy, so I suppose you may do the same.”


“That’s a very pretty name,” I said. Without thinking. Again. Would I ever learn?


She turned to me with a sparkling smile, and, maybe it was my imagination…it has done crazier things…but I thought that maybe one of her roses turned a darker shade of pink, which was a teacups way they blushed. “Thank you,” she replied softly.


If I had roses decorating myself, I knew I would be blushing at this point. Thank goodness I didn’t. One of the pros of being a coffee mug. “Y-you’re welcome,” I stuttered. For once in my life I think I said the right thing to a female beverage deliverer. I cherished the rare moment.


“He’s shy,” Mocha said, stating the obvious and ignoring the glare I shot him.


Adderley gave an airy laugh. “I can tell,” she replied. “But from my experience, shy mugs are the most humble and therefore make the best friends because they never try to outshine others around them.”


“Well, that’s certainly true in Cay’s case,” Mocha agreed. “He’s the most humble mug I’ve ever met, not to mention a great friend.”


I felt like melting into the floor again…but now for a different reason. Mocha was determined to make me sound like the finest thing since sliced bread, which simply wasn’t true.


“Really?” Adderley asked with a smile. “I assume Cay must be his nickname.”


“Yep. Although, his name was so short it didn’t really need a nickname.”


Briefly, a waitress came and cleared some of the dishes away, interrupting our conversation, and I was secretly pleased to see Mocha’s master swallow the last portion of caffeinated goodness he carried before placing him on the tray last minute. When Adderley wasn’t watching I gave him a smugly triumphant look. I had evaded his efforts yet again.


“Well, that was awkward,” Addy mentioned suddenly, bringing my attention back to her.


“No kidding,” I growled darkly. “He’s like that every time…well, he’s been trying to set me up.” Thank goodness she couldn’t tell I was embarrassed.


“Set you up?” She sounded honestly confused.


“He thinks I need to settle down and have a family,” I explained.


Talk about a conversation stopper. An awkward silence ensued, and I almost wished that Mocha had stayed. Almost.


“Whom has he tried to set you up with?” she asked abruptly.


Addy giggled. “That’s quite the collection.”


“It is,” I sighed again. “And every single time was just as awkward. But still he refuses to ‘give up’ on me as he put it.”


“You think you’re a lost cause?” Addy asked.


“Pretty much,” I replied sadly. “I mean, who would want to marry me, a super boring, ordinary coffee mug?”


There was a moment of silence before Addy answered, “I would.”


And that, my friends, is how I met my beautiful wife. We’ve been living on our own shelf in the coffee shop ever since. We both still work there during the day, but still find time to spend together after the café closes.


Mocha won’t let me forget how he was the instigator of our relationship, but I let him be my best mug…so I’m pretty sure we’re dead even now.


This story started out to make fun of Romance books, but it was so fun writing from a coffee mug's perspective, that it quickly went on from there. Besides, I doubt any one else doing the link-up thought to write from that perspective...and I love being original. ;)

Email ThisBlogThis!Share to TwitterShare to FacebookShare to Pinterest
Labels: A Novel Idea, Writing